One of the best milestones in Runescape is achieving your first level 99 skill. It’s an unforgettable moment in anyone’s Runescape career.

But getting a level 99 skill is easier said than done. After all, Runescape has taught us that half of 99 isn’t 49.5; it’s 92. The experienced needed for level 99 is in the millions, and you will spend a lot of time or money (Or both) getting your first 99.

Some people decide to tackle one of the more difficult skills as their first level 99, like Runecrafting, Thieving, or Construction. Many others opt to go down an easy route, like Firemaking, Fletching, or Cooking. And if it’s level 99 Cooking you want, the likely first step on your journey is completing Cook’s Assistant.

Cook’s Assistant is a timeless quest. It’s short, sweet (Pun intended), and provides good rewards for the time invested. Grab your chef’s hat and apron. We’ve got some baking to do.

The only things needed for Cook’s Assistant are an egg, a pot of flour, and a bucket of milk. You can easily obtain all of them from multiple locations around Lumbridge. You may want to bring along a couple of GP to get a bucket from the General Store if you don’t already have one. You can have these items ready in your inventory before speaking with the Cook to turn this into a 30-second quest.

Speak with the Cook in the kitchen on the bottom floor of Lumbridge Castle. He seems to be worried about something. 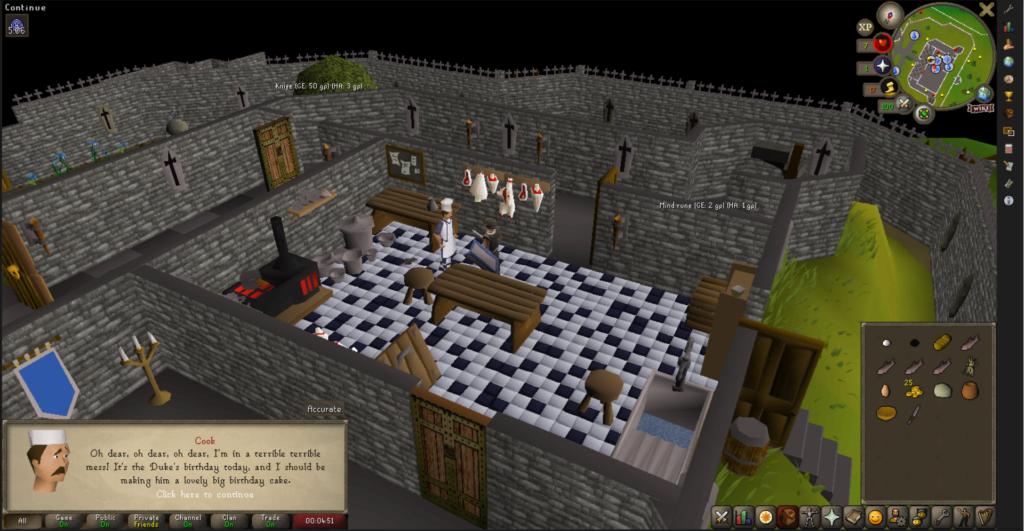 It turns out that the Lumbridge Cook, whose sole job is to cook for Duke Horacio, forgot to cook a cake for Horacio’s birthday. The Cook needs you to get him an egg, a pot of flour, and a bucket of milk. You can get an egg from one of the nearby chicken coops, flour from the mill, and milk from one of the cow farms. Sounds easy enough. 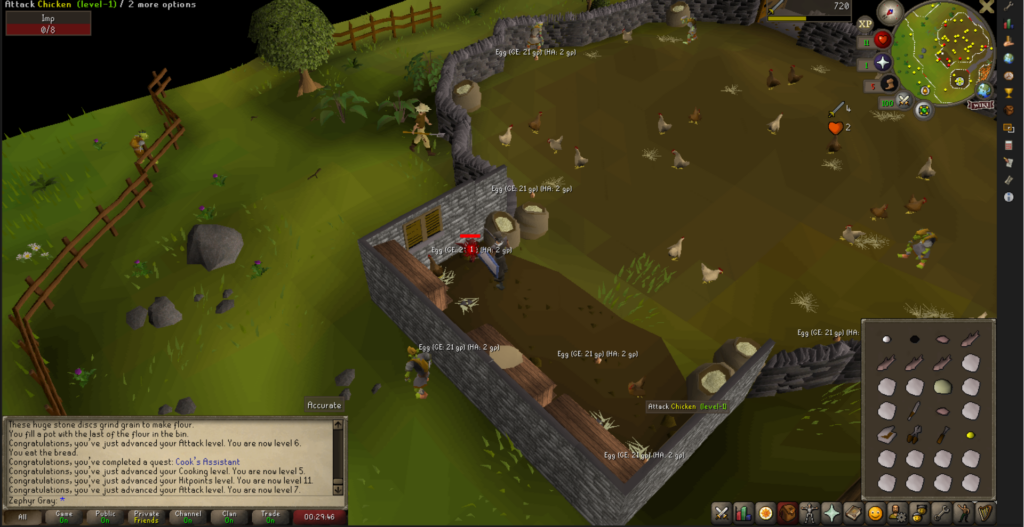 You can ignore the first cow pen you come across, as it doesn’t have a milking cow. Instead, head past it, and you’ll come across Farmer Fred’s farm. Grab an egg that one of the nearby chickens conveniently laid for you. You can start the Sheep Shearer quest while you’re here if you want. 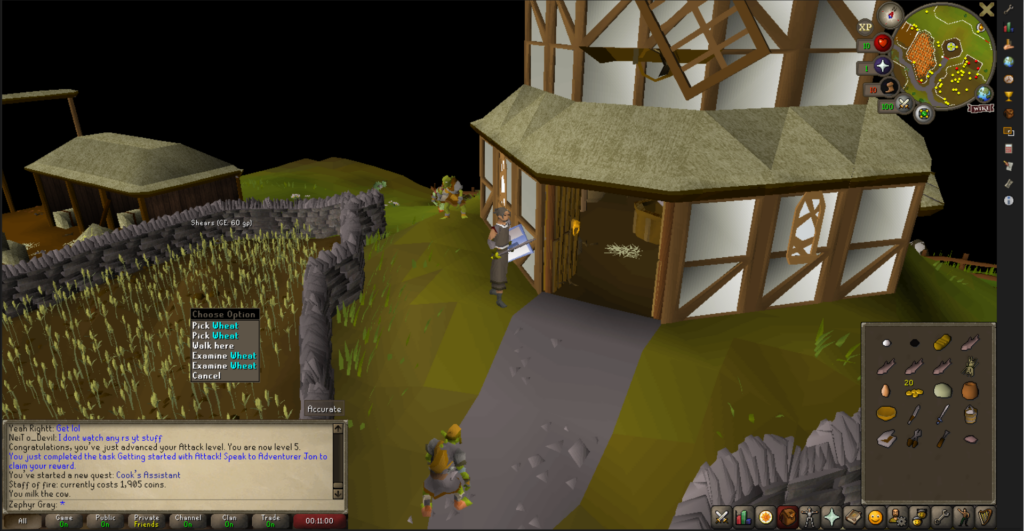 Head northwest from Freddie’s farm until you come across a wheat field. Pick a bushel of wheat, then head inside the nearby mill. Head to the top floor, place your grain inside the hopper, then operate the hopper controls. Head back down to the bottom of the mill and empty the flour bin. You’ll now have a pot of flour! One more ingredient to go. 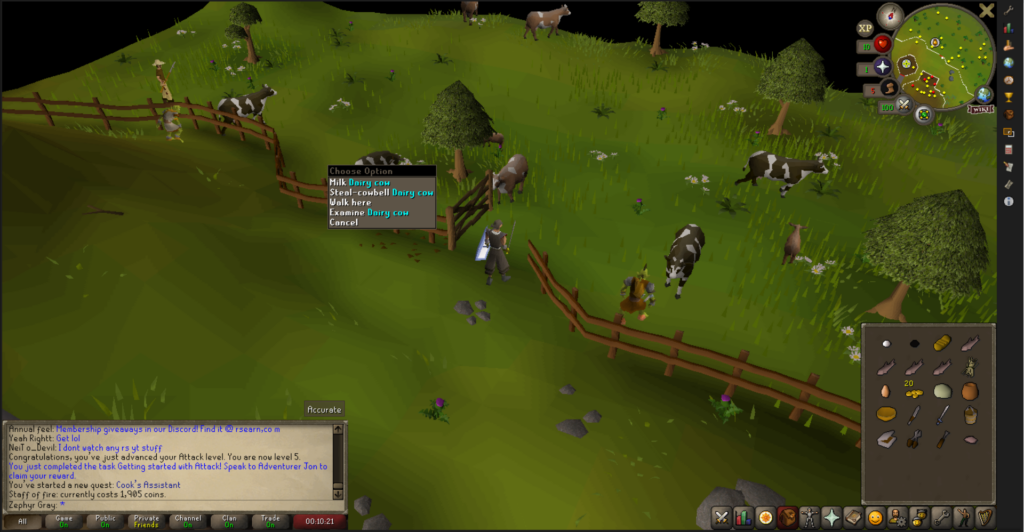 Head behind the mill and into the nearby cow farm to milk the dairy cow. The Lumbridge Cook will recommend that you milk the cow at Groats’ farm across the river, but there’s no need to go there. The Dairy cow here is closer to the castle. 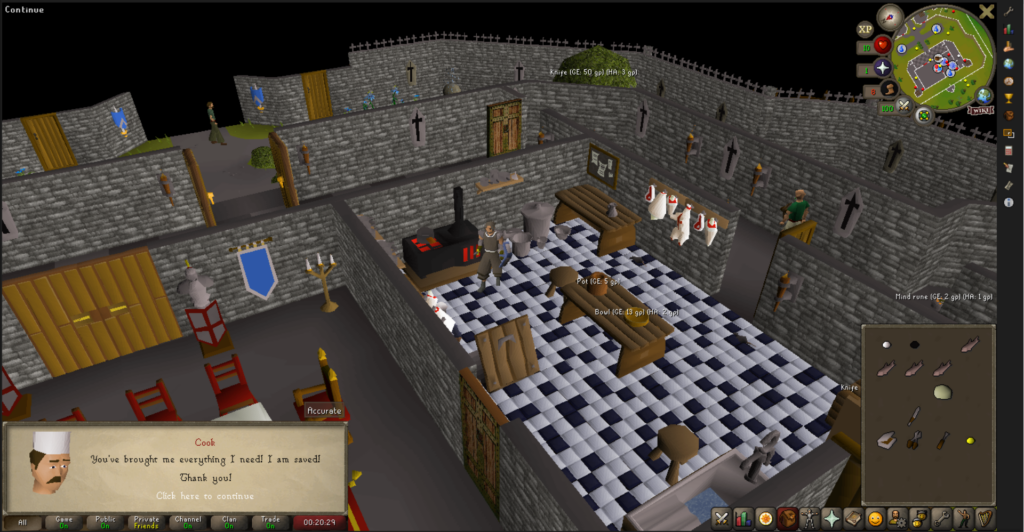 Return to the Lumbridge Cook with all three ingredients. If you already have them in your inventory when you first initiate the quest, he will humorously ask if you were planning on baking a cake. 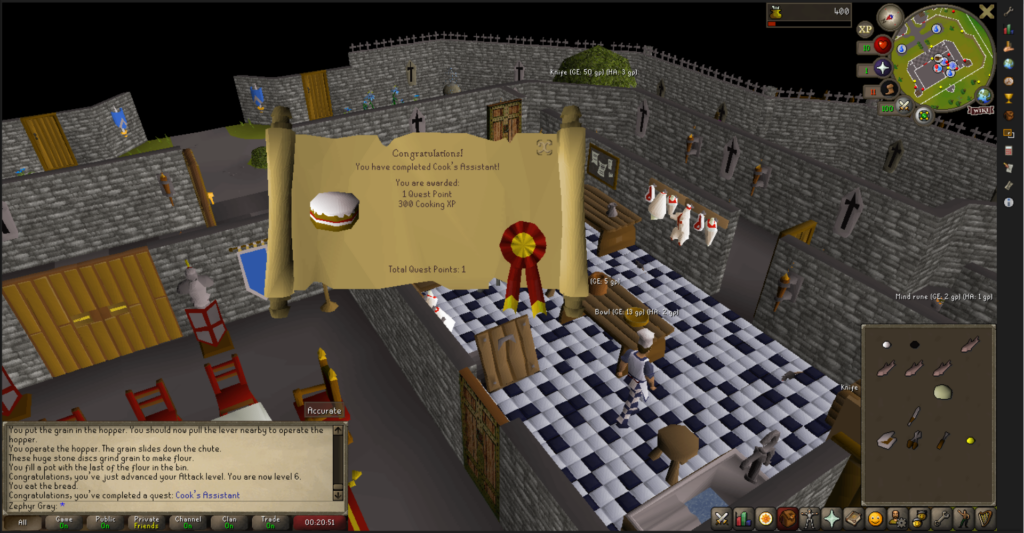 Completing Cook’s Assistant will give you the rewards of 1 Quest Point and 300 Cooking experience points. At least, that’s what it seems is all you get.

The game doesn’t tell you this in the quest rewards, but completing Cooks’ Assistant will also grant you access to the cooking range inside the kitchen: the Cook-o-matic 100.

The Cook-o-matic 100 is one of the best ranges in the game to use for Cooking training. There are two nearby banks, one upstairs, and the Culinaromancer’s chest in the basement that you can use.

Dubbed the Cook-o-matic 100 by the Lumbridge Cook, this is a handy piece of equipment. All food in Runescape has a Cooking level that you need to achieve to stop burning said food. The Cook-o-matic 100 lowers the standard requirements to stop burning various food. The bonus, unfortunately, does not apply to all food in the game. Many food items that benefit are random things most players will never cook, like mackerel or snail meat. Funnily enough, cakes don’t aren’t on the list despite Cook’s Assistant being about making a cake.

The Cook-o-matic 100 will reduce the level to stop burning 99% of the food by 3-4. It’s not a big deal since Cooking levels come very quickly. But the last two items on the list have significant reductions and are very useful: the Botanical pie and Mushroom pie.

You typically have to have 84 and 89 Cooking to stop burning Botanical and Mushroom pies. But with the Cook-o-matic 100, those numbers drop to 52 and 60, respectively (Levels you can achieve in a few hours). Botanical and Mushroom pies give a temporary +4 boost to Herblore and Crafting, respectively. Both are expensive to buy outright or the ingredients, so this is a net positive. Thanks, Cook-o-matic 100!

Question: Is There Any Other Use of the Cook-o-matic 100?

Answer: Yes. One of the objectives for the Easy Lumbridge/Draynor Achievement Diary is to cook some bread on the Cook-o-matic 100.

Question: I Can’t Find the Culinaromancer’s chest! Where is It?

Answer: You cannot see the Culinaromancer’s chest until you start Recipe for Disaster. If you’re a new player, forget about this one for a spell. The skill requirements for RfD aren’t bad, but the quest requirements are significant.

Question: Is the Cook-o-Matic 100 the Best Cooking Range in the Game?

Answer: Despite how good it is, no, it’s not. Several other areas in Runescape make for better Cooking training spots. The best is probably the Hosidius House Kitchen.

One of the earliest goals most Runescape players tackle is completing all of the F2P quests in the game. Most are quick and easy ways to stack your Quest Points (Of which you will need many). Most of them don’t have overly amazing rewards (As expected of mostly beginner-level quests), but there are some exceptions. Cook’s Assistant is one of them.

The Cook-o-matic isn’t the best cooking range overall, but it’s definitely the best early game range. You can use it to set yourself nicely on training food by snagging some raw trout/salmon from the Barbarian Village fishing spot and cooking them here. It’s a rite of passage in any Runescape player’s journey. And it’s part of the unforgettable experience that is Runescape.

For more interesting readings check out:

Xavier Geitz
Xavier has been playing Runescape for over 15 years. He's had periods of absence like every seasoned Runescape player, but he always came back. Whether it was Varrock General Store wars, sniping every uncut gem in stock, or juking players in Fist of Guthix, Runescape has provided Xavier with endless fond memories. Runescape is an irreplaceable piece of nostalgic goodness that Xavier will play until the end of time.

Learn More About Us!
Watch the latest videos here!